How to resolve AdBlock issue?

Action 1: You are using an adblocker. All the content on this site is provided by our advertisers. Please support us by whitelisting this domain - https://accidentallyaccessible.com/

Action 2: You must disable any adblockers for this site to continue browsing 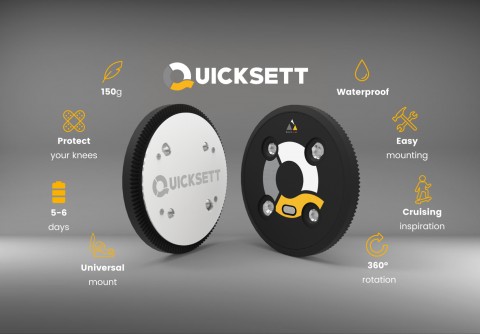 A rotating disk that fits into your binding. Allowing a cruising position (like skateboarding) on the flats for comfort in the queues and chairlifts.

Product Description:
A story of passion. At its origin two brothers, Rémi and Sylvain Garnerone, lovers of the snow-capped peaks of their valley, Val d'Allos in the southern Alps,, and of extreme sports.

With his experience in design, Rémi is the creative one. He imagines and designs products adapted to the specific needs of extreme sportsmen. Sylvain knows how to spread the good word. Since the end of his business studies, he has done everything to develop the image of the Black-Line brand.

The QuickSett is a rotating disk that fits into your snowboard binding and allows for a cruising position (as with a skateboard) on the flats allowing the snowboarder more comfort in queues and on chairlifts.

The QuickSett facilitates the rotation of snowboard bindings via remote locking and unlocking. No more knee pains! You can now put your foot in the same axe of the board during the rest phases, which represent on average 60% of a snowboarder's day. This noticeably reduces fatigue and joint pains.

With the option of the "pack Double", which is a QuickSett under each feet, you can change stance in a few seconds from alpine to freestyle or freeride!

The QuickSett is compatible with bindings that use a standard disk (Burton, Union, Flow, SwitchBack, ...) due to its adaptability outer rings which vary depending on the brand and model of the binding, as well as the universal screw holes which make it compatible with 4x4, 2x4 and channel boards.

The QuickSett has been designed not to affect the experience of the rider going down the slope but by impacting the rest phases directly. Thus in it's by default locked position our Quicksett responds to all the same norms and regulations as a classic binding disk. This means that there are no risks with running out of battery, which has an in condition autonomy of 4-5 days, as the disk would just act as a regular disk.
Tweet